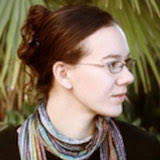 Jamie Thierman (b. Fairbanks, Alaska) is an American composer of classical and film music, and a lover of drums from around the world.

In 2005, Dr. Thierman attended the University of Oregon as an undergraduate in Music Composition, where she studied with Terry Mcquilkin, David Crumb, and Robert Kyr. In Oregon, Jamie began exploring world music, such as African drumming, East European folk music, and Balinese Gamelan. She was employed as the music director at the UO Thomas More Newman Center for three years.

Jamie moved to Los Angeles in 2010 to attend the University of California, Los Angeles as a Ph.D. composition student, where she assisted and taught music theory and musicianship, and studied composition under David Lefkowitz, Ian Krouse, and Paul Chihara. At UCLA she received the Jerry Goldsmith award in 2011 and the Hugo Davise Composition Award in 2015. She was also selected twice to have her music played in Russia by the Moscow Contemporary Music Ensemble, in 2013 and 2015. Jamie graduated from UCLA in 2015 with a Ph.D. in music composition and theory.

She continues to combine her love of music and love of travel by broadening her studies to encompass music and instruments of non-Western cultures, including West Africa, Eastern Europe, and Bali. In 2014 she attended ThisWorldMusic’s three-week intensive African Music and Dance Workshop in Ghana.

Currently Dr. Thierman is working as a composer and orchestrator in Los Angeles, writing music for chamber groups, wind ensemble, and independent films, and assisting in the orchestration of major movies and TV shows including Agents of Shield, Outlander, Dark Tower, and Despicable Me 3 and many more. She is teaching herself to play bodhrán (an Irish drum) and continuing her studies in West African drumming.