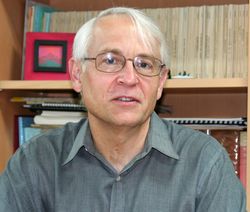 James Mobberley (b. 1954, Des Moines, Iowa) has been on the composition faculty of the Conservatory of Music at the University of Missouri-Kansas City since 1983, and has recently been named Curators’ Professor of Music. He also serves as Coordinator of the Composition Programs, and Director of the Musica Nova Ensemble.

He has received numerous fellowships, grants, and awards, including a Guggenheim Fellowship, the Rome Prize Fellowship, a Composer's Fellowship from the National Endowment for the Arts, the 2001 Van Cliburn Composers Invitational, the Lee Ettelson Composers Award, the Mrs. Ewing M. Kauffman Excellence in Teaching Award, and numerous others. Commissions have come from the Barlow Endowment for Music Composition, Meet the Composer, the St. Louis Symphony Chamber Series, the Kansas City Symphony, and numerous individual performers.

Mobberley's music spans many media, including orchestral and chamber music, music for film, video, theater, dance, and music that combines electronic and computer elements with live performance. Overall his music has received more than 650 performances on five continents.