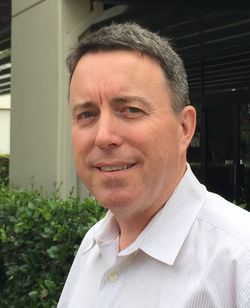 James Lamb (b. 1961, Mt. Clemens, Mich.) is an American composer and audio engineer.

Growing up in North Hollywood, the sounds of West Coast jazz were his introduction to music. James studied the trumpet under instruction from Los Angeles’ finest musicians, and was awarded a full scholarship to California State University at Northridge’s School of Music.

After graduation, James joined the Navy and went on to perform in concerts throughout the Pacific Northwest as a musician in a Navy band. In the mid 1980s, he became arranger, performer, and leader of a Naval band which toured the Orient, Asia, and Australia. In 1991 James left the Navy and moved to New York City to become a freelance artist. Credits included performances at Lincoln Center, the New Jersey Pops Orchestra, the Tavern on the Green, and conducting the New Jersey All Star Big Band. The highlight of his stay in New York was assuming the position of Music Director/Conductor of the Great American Songbook Orchestra. Performances that included a critically acclaimed Carnegie Hall debut, the Williamson Center for the Performing Arts, and the Harman Center further defined his talent as a conductor.

James has been in the music and audio industry for over 30 years, previously with long tenures at Apogee Sound and Digigram prior to founding Point Source Audio. Aside from his business roles in the industry, James continues to nurture his passion for music performance and composition as a regular volunteer with the National Guard band.