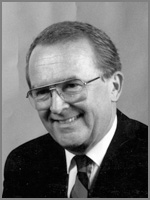 For twelve of his 37-plus years with Walt Disney Productions, Jim served as music director for both Disneyland and Walt Disney World, and conducted the All-American Marching Band at the grand opening of Euro-Disneyland in Paris on April 12, 1992.

A prolific composer/arranger with over 400 published works to his credit, Jim also appeared as guest conductor with the symphonic orchestras of Houston, San Diego, Winnipeg Honolulu, New Orleans Pops, Los Angeles Chamber Orchestra, the Radio City Music Hall Orchestra, the Hollywood Bowl Orchestra, and others. Among other activities, he was a trombone clinician for UMI-Conn and a member of the American Bandmasters Assn. and served on the advisory board of the Association of Concert Bands.

Jim’s arrangements are currently heard at theme parks around the world, including all the Disney parks, Knott’s Berry Farm, Canada’s Wonderland, Hershey Park, Lotte World (Korea), Everland, and Movie World in Germany. He also arranged and orchestrated music for the Boston Pops, the London Philharmonic, several Super Bowls, and MENC’s World Largest Concert. Jim continued to guest conduct for high school, college and community bands and conducted the Community Band of America (Band at Sea) since 1994 until his passing.