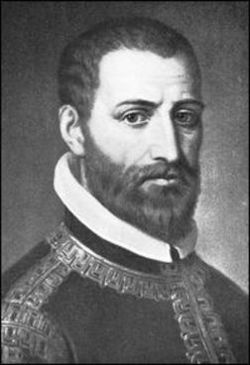 While little is known about his early life, a Flemish origin along with a French upbringing has been suggested from variations on the spelling of his name, and he may originally have been from the vicinity of Liège or Namur, in present-day Belgium. He moved to Italy as a young man, and was present in Florence by the late 1520s, therefore having an opportunity to meet or work with Philippe Verdelot, who wrote the earliest named madrigals. In or immediately before 1538 he moved to Rome where he obtained an appointment with the papal choir at St. Peter's Basilica. Still in Rome, in January 1539, he probably was made a member of the Julian Chapel. After some months there he became a member of the Sistine Chapel, where he was appointed "magister puerorum." The same year saw the publication of no less than four books of his madrigals. The first of these collections, Il primo libro di madrigali, went through 45 editions, becoming the most widely reprinted collection of madrigals of the time.

Although he also wrote sacred vocal music, In addition to his work as a madrigalist, and distinguishing him from the other prominent early composers of madrigals – Philippe Verdelot and Costanzo Festa – he was equally prolific and adept at composing chansons, particularly late in his career when he lived in Paris.

Arcadelt was the most influential member of the early phase of madrigal composition, the "classic" phase; it was through Arcadelt's publications, more than those of any other composer, that the madrigal became known outside of Italy. Later composers considered Arcadelt's style to represent an ideal; later reprints of his first madrigal book were often used for teaching, with reprints appearing more than a century after its original publication.