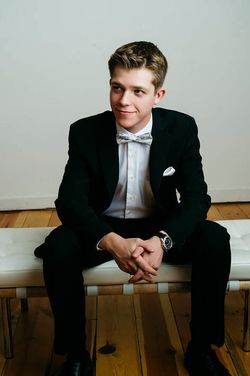 Jacob Beranek (b. 10 November 1998, Waukesha, Wisc.) is an American composer and pianist.

Beranek is pursuing [2020] a Bachelor of Music degree in composition at Vanderbilt University’s Blair School of Music, and currently studies with Dr. Michael Alec Rose. Beranek has served as a Composition Fellow at the Talis Festival & Academy in Saas-Fee, Switzerland, and has also studied at the Curtis Institute of Music Young Artist Summer Program.

His music, rooted in melody and narrative structure, regularly emphasizes a unique perspective in honoring traditions—musical, religious, or even his own heritage. Beranek currently serves as the first-ever Composer-in-Residence of the Midsummer’s Music Festival, which has commissioned four new pieces to date, including his Wind Quintet (2019). Recent performances of his music have taken place in London, Prague, Nashville, and Philadelphia, and his work has also garnered international recognition in competitions such as The American Prize for Composition, ASCAP Morton Gould Young Composer Awards, Edwin Fissinger Choral Composition Prize, National Federation of Music Clubs Emil & Ruth Beyer Awards, and The Gesualdo Six Composition Competition, in which he received first place for ages 21-and-under worldwide.

In addition to composition, Beranek is a serious pianist and devotee of Czech music due to his heritage. He has had the privilege of studying music in Prague during visits in 2015 and 2017, and returned in November 2018 for the European premiere of his Památník (2018) at Prague Castle by the Band of the Castle Guards & Czech Police.

Beranek is a member of WASBE.