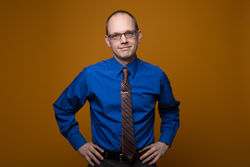 Jacob Bancks (b. 1982, Fairmont, Minn.) is an American composer and educator.

Bancks is a student of Shulamit Ran, Marta Ptaszynska, Carlos Sanchez-Gutierrez, Ricardo Zohn-Muldoon, and Augusta Read Thomas, and has also participated in masterclasses with Luca Francesconi and Louis Andreissen. His other mentors include Cliff Colnot, Daniel Horn, and Ray and Sue Sidoti. He holds degrees from the University of Chicago, Eastman School of Music, and Wheaton College in Illinois, and serves as assistant professor of music theory and composition at Augustana College in Rock Island, Ill.

Passionate about connecting with and developing audiences for concert music, Bancks is a frequent commentator on WVIK public radio and serves as program annotator for the Quad City Symphony. He has earned awards, honors, and commissions from the Minnesota Commissioning Club, the American Academy of Arts and Letters, BMI, and the Commission Project.