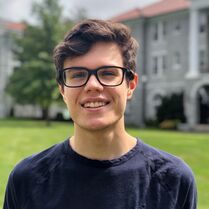 Jack Yagerline (b. 15 May 2000, Fairfax, Va.) is an American composer and percussionist.

Mr. Yagerline earned his bachelor's degree in nusic, concentrating in music composition, from James Madison University in 2022, where his primary instructors were Dr. Eric Guinivan and Dr. Jason Haney. He is currently [2023] a graduate assistant the University of North Carolina at Greensboro where he is pursuing an M.M. in music composition, studying with Dr. Mark Engebretson and Dr. Alejandro Rutty.

Yagerline is a composer and percussionist whose music spans a wide variety of genres and styles. His diverse set of influences range from contemporary classical composers such as Philip Glass, John Cage, and Max Richter, to rock bands like The Beatles, Weezer, and Sonic Youth, and electronic musicians such as Hiroshi Yoshimura, Aphex Twin, and C418.

As a composer, Jack makes collaboration a major part of his creative process. Recent collaborations include his flexible percussion work Nature Scenes with the JMU Percussion Ensemble, Skylights, a saxophone quintet commissioned by Anthony Cincotta for him and the Invicta Saxophone Quartet, and the electronic score to the 2329 Dance Collective’s dance film “Lucent | Shadowed” along with fellow composers Kaleb Branner and Andrew Welling.

Jack also recently released his debut album, Snapshots, which is a set of solo piano pieces composed, performed, and produced by him. In addition to composing, Jack enjoys recording and producing music, and likes to combine his love for composing and performing with his love for music production.

Most recently, Jack was selected as the winner of the JMU New Music for Wind Ensemble Composition Competition for his piece Distant Mountains, which was premiered by the JMU Wind Symphony in April 2022. Jack also recently won the @Percussion Podcast Intro Music Competition, and his music is now the current opening music for the podcast, as well as winning third place in the Reno Pops Orchestra Composer Competition for his orchestral piece, June 6th​.