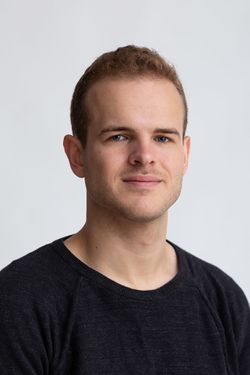 Jack Frerer (b. 4 April 1995, Manhattan, N.Y.) is an American composer, filmmaker and student.

Jack was raised primarily in Sydney, Australia. He studied with John Corigliano and Robert Beaser at The Juilliard School, and was awarded a Benzaquen Career Advancement Grant upon graduation.

Jack is the recipient of a Charles Ives Scholarship from the American Academy of Arts and Letters, a Morton Gould Composers Award from ASCAP, the Suzanne and Lee Ettelson Composers Award, and the Brian Israel Prize from the Society for New Music, and winner of both the Juilliard Orchestra and Gena Raps Chamber Music competitions. He was a Tanglewood composition fellow for 2019, a composer for the New York City Ballet’s 2019 Choreographic Institute, and is currently composer-in-residence with the Arapahoe Philharmonic.

"A real messy aggregate of influences” is how composer Jack Frerer describes his musical language. “I grew up playing in bands, so that music — everything from Led Zeppelin to the Dead Kennedys, Buddy Guy, Chick Corea, Ray LaMontange . . . definitely finds its way into my compositions.” Frerer’s music, described as “exuberant” and “delicious” (Boston Musical Intelligencer), has been performed across the U.S., Australia, Europe, and Asia, and was performed in 2019 by ensembles including the Nashville Symphony, the Arapahoe Philharmonic, the Albany Symphony’s “Dogs of Desire” ensemble, the Australian Youth Orchestra, and the UT Austin Wind Ensemble, among others.

As a filmmaker, Jack has created films for The Juilliard School and Quest Magazine, dancers Marcelo Gomes and Julie Kent, as well as music videos for bands and ensembles. He is a co-creator and producer of The Roof, a collaborative film and performance series he created with dancer Liana Kleinman which features New York–based choreographers and composers.