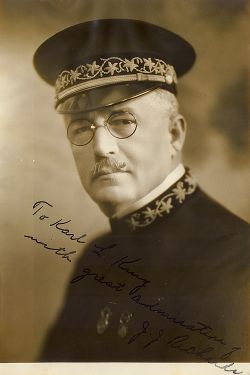 His family immigrated to the United States when Richards was four, settling in Peterson, Kansas. He began learning various brass instruments at the age of ten, progressing rapidly, playing in various amateur bands. At the age of nineteen he was appointed leader of the Norton-Jones Circus Band, beginning a long career as bandmaster with numerous ensembles.

Richards’ first composition appeared in print in 1899; during this period he began writing marches and other works, and certainly many of his early works were first performed by the bands that he led. His career as a circus bandleader culminated with his directorship of the Ringling Bros. Circus Band from 1911 through 1918.

During the circus off-seasons, Richards attended Kansas State Teachers College and the American Conservatory of Music. Beginning in the early 1920s, he taught school music and directed bands in various Illinois towns through 1944. In 1945, upon the death of Herbert L. Clarke, he was appointed director of the famed Long Beach, California, Municipal Band, a post he held until 1950. Subsequently, Richards returned to Illinois in the spring and summer to lead the Mt. Morris Band while wintering in Long Beach.

Richards was highly regarded by his peers. He was elected to the American Bandmasters Association in 1939 and served as its president in 1948. He composed well over one hundred works that were published. Undoubtedly his most famous composition - one which enjoys great popularity today - is Emblem of Unity march.