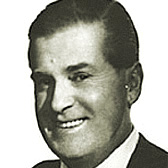 Although he started working in a bank at age 17, by age 22 he had published his first hit song, after which he was offered the chance to write music for various shows. In 1932 he moved to Hollywood where he continued to write. A tune remembered today is Love Letters in the Sand.

Coots composed over 700 popular songs and over a dozen Broadway shows. In 1934 he wrote the melody with his then chief collaborator, lyricist Haven Gillespie, for the biggest hit for them both, Santa Claus Is Comin' to Town. The song became one of the biggest sellers in American history.