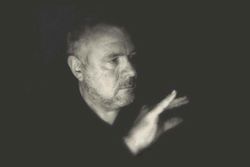 J.M. Suijkerbuijk taught himself to read music at the age of eleven and immediately started writing his own music. At the age of eighteen, he moved to Utrecht, to study musicology at the University of Utrecht with Marius Flothuis, Jos Kunst and Kees Vellekoop, amongst others, graduating with a thesis on the relationship between Alban Berg’s Violin Concerto and Ferruccio Busoni’s Berceuse Elégiaque.

As a student, J.M. Suijkerbuijk developed his own compositorial language in which the pitch material is taken from a modal system based on overtones, which renders a form of tonal centre-based music that appears both alien and familiar. His musical language also focuses heavily on the melodic aspect, whilst obfuscating rhythm and meter. The modal system that the composer developed for his compositorial language was applied for the first time in a short piece for piano, later published as part three, Skaz, of Vier Noveletten, opus 88. The opus 63, Perigæum, for large wind ensemble, was the first larger scale composition in this new technique to be performed before an audience. Since Perigæum he mainly wrote highly polyphonic orchestral works, among which seven symphonies, nine concert overtures and two symphoniettas, though smaller ensembles and chamber music gained more attention in later years.

Due to health problems there is a compositorial gap between 1996 and 2009, in which only the opus 97, Anticipation was completed (in 2001). A trained pianist and a self-taught violinist, violist and guitarist, he has also no longer performed publicly since 1996.

Currently [2021] the composer lives and works in Geleen, Netherlands.