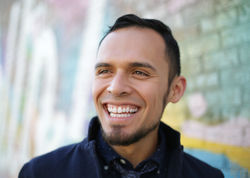 Ivan Trevino (b. 1983) is an American composer, percussionist, and rock drummer.

Ivan received a BM and MM from Eastman School of Music, where he went on to design and teach a course in music business before moving to Austin in 2014.

As a composer, Ivan’s music is regularly performed around the world and has become standard repertoire in the field of percussion. He is a multi-award winning recipient of the Percussive Arts Society’s International Composition Contest and has composed over 40 works for the percussion idiom, many of which were commissioned by leading performers and universities in the field.

In addition to composing and performing, Ivan is an active educator who has presented educational clinics at hundreds of institutions around the world. He is currently an artist / clinician for Malletech Instruments and Mallets, Zildjian Cymbals, Evans Drumheads, and Meinl Percussion. In 2014, Malletech collaborated with Ivan to design his signature marimba mallets, which are now distributed to percussionists around the world.