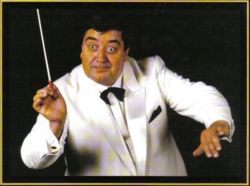 István Bogár (born 20 August 1937; died 26 December 2006), after preliminary studies including piano, organ, accordion, trombone and composition, gained his diploma in composition at the Ferenc Liszt Academy of Music, Budapest, as a pupil of Endre Szervánszky. From 1957–68 he worked as a music school teacher; from 1968–72 he was deputy editor-in-chief at the Editio Musica Budapest; from 1972–76 he was the leading programme organizer for the State Philharmonia; from 1976–83 he was artistic secretary to the Hungarian State Orchestra; from 1983 he worked for Hungarian Radio as director of their musical ensembles. From 1988 onwards he occupied himself exclusively with composition and conducting, and in the meantime taught for several years at the Academy of Music in the department of further training for wind ensemble conductors. In 1989 he founded the Budapest Strauss Orchestra, as conductor of which he gave over 1000 concerts in more than 30 countries. As a composer he became known worldwide principally for his wind compositions (he wrote concertos for trumpet, for trombone and for tuba, for two horns and for trumpet and horn, and in addition composed many chamber works for wind instruments and works for wind orchestra), but he also wrote an oratorio, a cantata, choral works, folksong arrangements etc. His book entitled Brass Instruments, published in Hungarian in 1975, remains to this day a standard work on the subject.