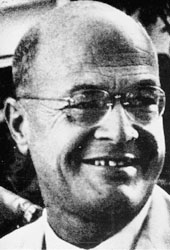 Dahl began his formal education in Germany and continued his studies in Switzerland after fleeing the Nazi regime. Dahl immigrated to the United States to study with Nadia Boulanger in California, settling in Los Angeles. There, he embarked on a wide range of musical activities including work for radio and film studios, composing, conducting, giving piano recitals, and lecturing. Dahl joined the University of Southern California, Los Angeles, faculty in 1945.

Dahl’s compositional output was fairly small. His music includes periods of expressionism, neoclassicism, serial techniques, and key-centered tonality. Most of his early compositions were for piano and chamber groups. Among his most important works are Concerto a Tre for clarinet, violin, and cello (1946); Elegy Concerto for Violin (1963, completed by Donald Michalsky in 1971); Music for Brass Instruments (1964); and The Tower of Saint Barbara for orchestra (1954). Scores for wind band include Concertino a Tre, Concerto for Alto Saxophone and Wind Ensemble, Hymn (transcribed for solo piano by John Boyd at Indiana State University), and Sinfonietta.

He married Etta Gornick Linick, who worked with Dahl to keep his homosexuality hidden from the world. After Dahl’s death, his step-son expressed his belief that repression of his homosexuality prevented Dahl from fully expressing himself in music, saying that “Ingolf labored under levels of repression that were antithetical” to creative music-making.

Ingolf Dahl was a versatile and proficient pianist, conductor, composer and teacher of music subjects. Long identified with the promotion and performance of contemporary music, Dahl's works for wind band have had a wide appeal for audiences, conductors and performers. They have also inspired at least three doctoral dissertations.