In a Monastery Garden 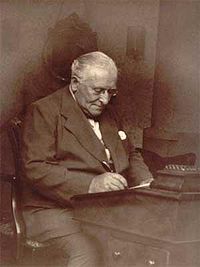 The first theme represents a poet’s reverie in the quietude of the monastery garden amidst beatific surroundings – the calm serene atmosphere — the leafy trees, and the singing birds. The second theme in the minor, expresses the more “personal” note of sadness, of appeal and contrition.

Presently the monks are heard chanting the Kyrie Eleison (which should be sung by the orchestra) with the organ playing and the chapel-bell ringing. The first theme is now heard in a quieter manner as if it had become more ethereal and distant; the singing of the monks is again heard — it becomes louder and more insistent, bringing the piece to a conclusion in a glow of exaltation.

In a Monastery Garden is a piece of light classical music by Albert Ketèlbey, who composed it in 1915 after a visit to a real monastic garden, now the Benedictine monastery of St Augustine's Abbey, Chilworth in Surrey. It was especially successful when performed by Ronnie Ronalde who often performed it as his finale and sold over a million recordings.