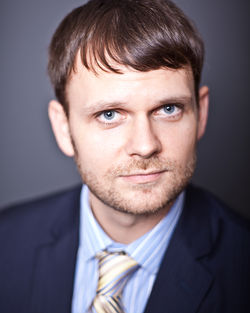 On December 2nd, 2014, my dad lost his battle with cancer. In Memoriam is a piece about the emotions that we all went through after he was diagnosed in 2014.

Although the work flows attacca from one movement into the next, the piece is technically “divided” into two halves: Threnody and Adieu. Therenody’s opening conveys anger, sadness, and confusion with a bold B-flat minor chord in an octave leap, a sigh motive, and a maelstrom of wild altered scales and jagged trills. Most of the movement’s material comes out these fierce opening bars. The movement is written in A-B-A’ form whose middle section features an acrobatic conflict between accented beats of three and four sixteenths. At the final return of the A, I modified the sigh motive by adding a bend between the two pitches to enhance its potency. The final return of the A comes to a climax and then floats into the ether (a sea of timbre trills), transitioning into the second movement.

Adieu (goodbye) is a celebration of life. My father’s last words to me, other than “I love you,” were “live the life you want to live and never look back,” and are reflected in the ethos of the movement. The piece emerges out of the ether, stating a simple rising melody slowly and in piecemeal. The first climax is quickly averted and the music is wrested back into the depths of the first movement with a dolorous bari solo over a texture dominated by trills. A sextuplet quasi-arpeggione gesture lifts the music out of the depths and begins a tumultuous journey that features another ‘duel,’ this time between melodic fragments from the first and second movements followed by a wailing bari solo that ushers in the opening material and the movement’s final climax.

I would like to extend my most sincere thanks to the Kanari Quartet for organizing the consortium and spending hours of their precious time helping me bring this to life.