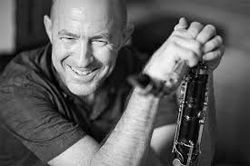 More than an extremely efficient configuration, the drum set is the embodiment of time, groove and cycle -- three good things to center a piece of music around. In Impulse Control the soloist is backed by five fellow percussionists, whose parts are generated by his initial Big Bangs: doubling, echoing, replicating, transforming, gradually coalescing into more orderly solar systems of polyrhythmic harmonies, from which a heterophony of melodies emerge. The cycles begin to interrupt themselves, and eventually the interruptions themselves become the cycles.

Impulse Control is a companion piece to Mumbai, a tabla concerto I wrote for Sandeep Das in 2009, and which Dan Piccolo performed brilliantly for his doctoral recital in Ann Arbor in 2015. Dan is the real ‘impulse’ behind the piece; he is also ‘control,’ in all senses and meanings of the words. It was commissioned by the Bowling Green Festival of New Music, where Dan premiered the piece in October 2019.