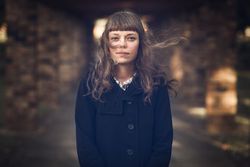 Holly Harrison (b. 1988) is an Australian composer.

Dr. Harrison recently completed a Doctor of Creative Arts degree in composition under the supervision of Bruce Crossman and John Encarnacao at the University of Western Sydney. She graduated from the Bachelor of Music program with the University Medal for outstanding academic achievement and was the recipient of an Australia Postgraduate Award.

Her music is driven by the nonsense literature of Lewis Carroll, embracing stylistic juxtapositions, the visceral energy of rock, and whimsical humor.

Holly is the recipient of numerous awards. She was the inaugural winner of the 2017 Sue W Chamber Music Composition Prize, awarded to an Australian female composer, and was a winner of Nu Deco Ensemble's 2018 Nu Works Initiative. She was awarded first place at the 2014 Young Composers Meeting in Apeldoorn, The Netherlands, chaired by Louis Andriessen, and was the winner of the 2013 Pyeongchon Arts Hall International Chamber Music Composition Competition (South Korea). She was a resident composer at the 2014 Mizzou International Composers Festival (USA) with Alarm Will Sound, and was one of two winners of The Riot Ensemble's (UK) 2014 Call for Scores.

Holly teaches composition at The King’s School and Caroline Chisholm College. She was previously composer in residence at MLC School, Burwood NSW. She is the Tasmanian Symphony Orchestra’s composer in residence across 2020 and 2021. In 2021, Holly is also a mentor for Omega Ensemble’s inaugural CoLAB program for pre-professional composers.