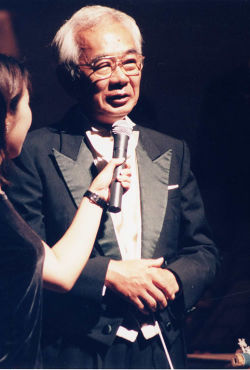 Hiroshi Hoshina (b. 1936, Tokyo, Japan) is a Japanese composer and educator.

He graduated from the Tokyo National University of Fine Arts and Music in 1960 as a composition major. In that same year, he placed first in the orchestral music division of the Music Competition of Japan. He also won an Arts Festival award (1963) and the Sasagawa Prize (1975). He is active both as a composer and a conductor, and teaches at the Hyogo University of Teacher Education.

As a composer, Hoshina was first interested in writing for orchestra. Bin Kaneda, who was a classmate of his in college, introduced Hoshina to band music. His first work for band was the concert march Antarusu no Oji (The Prince of Antarusu). Hoshina has written music for orchestra, operas, musicals, and pieces for band.

He is regarded as being one of the most distinguished composers in the field of wind instruments music in Japan. He is similarly respected for his unique method of teaching principles of performance. He has also published books on performance theory and conducting and gives lectures.