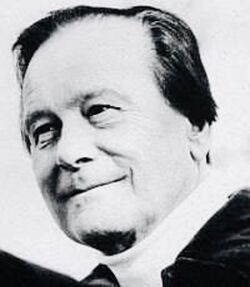 After graduation from secondary school, he enlisted in the Luftwaffe. Later he studied at the Leopold Mozart Conservatory in Augsburg and also at the University of Munich.

During his years as a teacher at the Trossingen Academy, he devoted himself teaching music through performance in band, being active as a bandleader and a composer of many works for wind ensemble and band.

During those years, he was also the editor of a series of chamber music for wind instruments. Since 1956 he published the series Spiel In Kleinen Gruppen (Playing in small groups) that has reached nearly 100 numbers.

In 1964 he became professor of musical education at the Orff Institute in Salzburg’s Mozarteum, in Austria, from which he retired in 1993.

Hermann Regner was for many years president of the Austrian Brass Music Association (Deja) and honorary member of the Orff-Schulwerk associations in Finland, Canada, Austria and USA. For his work he has received numerous awards, including the Carl Orff medal of the Association of Bavarian singing and music schools, the large silver decoration of the Republic of Austria and the Federal Cross of Merit of the Federal Republic of Germany.

Regner produced a wide range of works as a composer, as well as a series of works designed to be used in teaching. Thanks to his relationship to Carl Orff, he lectured and taught around the world, spreading the principles of the widely known Orff Method, based on musical imitation and improvisation by using a specific set of musical instruments.

He was the author of works for piano, violoncello, choir, chamber music, orchestra as well as books, articles, radio shows and films on music education subjects.