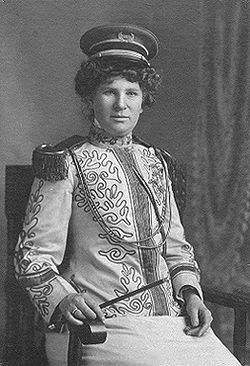 Born on a farm near Keene, New Hampshire, her father was a railroad engineer and later a purchasing agent for the New York, New Haven and Hartford Railroad. Musically inclined, she became proficient on both the cornet and the violin. She studied violin with Bernard Listerman, concertmaster of the Boston Symphony Orchestra.

Butler's band distinguished itself from 1900 to 1912, making several lengthy transcontinental tours. The band was impressive in appearance, owing partly to the beauty of the performers. It was probably the first all-women professional band in America. Often the band championed the works of American composers. Butler was referred to as the "female Sousa, " and Sousa was indeed among her personal friends. Once at a Sousa Band concert in Cincinnati, Ohio, Sousa called her out of the audience to guest-conduct his band.

After touring, she performed as a cornet soloist. She settled in the Cincinnati area ca. 1912 and lived the remainder of her life in Covington, Kentucky. Her activities were not restricted to music; she had an interest in public service and ran (unsuccessfully) for the United States Senate in 1936. She was also active in fraternal and social organizations, being a member of the Eastern Star, the Auxiliary of the Independent Order of Odd Fellows, the White Shrine of Jerusalem, and the August Willich Relief Corps.

In 1995, she was inducted into the Women Band Directors Hall of Fame. Butler's band uniforms, photographs, programs, sheet music, and other memorabilia are in the collection of the Smithsonian Institution in Washington, D.C.