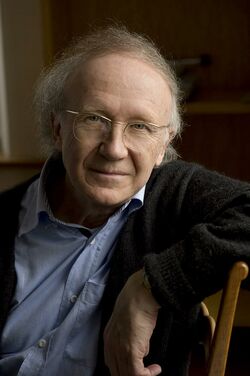 Heinz Holliger (b. 21 May 1939, Langenthal, Switzerland) is a Swiss composer, conductor and oboist.

Holliger began playing the oboe at age eleven, and studied at the conservatory of Bern before taking first prize for oboe in the Geneva International Music Competition in 1959. He studied composition with Sándor Veress and Pierre Boulez.

He has become one of the world's most celebrated oboists, and many composers (including Olivier Messiaen, Luciano Berio, Elliott Carter, Frank Martin, Hans Werner Henze, Witold Lutosławski, Karlheinz Stockhausen, Krzysztof Penderecki, and Isang Yun) have written works for him. He began teaching at the Hochschule für Musik Freiburg, Germany in 1966.

Holliger has also composed many works in a variety of media. Many of his works have been recorded for the ECM label.