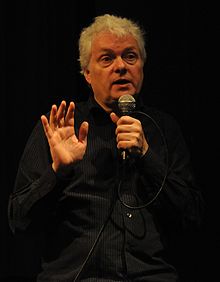 Heiner Goebbels (b. 17 August 1952, Neustadt/Weinstrasse) is a German composer.

Goebbels, who studied sociology and music in Frankfurt/Main, works as a professor at the Institute for Applied Theatre Studies of the Justus Liebig University in Giessen (Germany) and is President of the Theatre Academy Hessen. From 2012 to 2014 he was the artistic director of the International Festival of the Arts RUHRTRIENNALE.

As a composer, Goebbels creates ensemble works and compositions for large orchestra. He created several prize-winning radio plays, staged concerts, and since the early 1990's music theatre works, which were invited to the most important theatre and music festivals worldwide.

Goebbels co-founded the "Sogenanntes Linksradikales Blasorchester" (1976-1981) and avant-rock group Cassiber (1982–1992) with Alfred Harth, Chris Cutler and Christoph Anders. They toured extensively across Europe, Asia and North America, and made five albums. In October 1983 Cassiber (minus Anders) joined Duck and Cover, a commission from the Berlin Jazz Festival, for a performance in West Berlin, followed by another in February 1984 in East Berlin.

Some of his better-known work originated from his close collaboration with the East German writer Heiner Müller, resulting in stage compositions as well as shorter pieces (concerts as well as audio plays) based on Müller texts, such as Verkommenes Ufer (Waste Shore, 1984). Goebbels' attempts to fill the space between theatre and opera left blank due to traditional genre borderline drawing has led to projects such as Ou bien le débarquement désastreux (Paris 1993

Goebbels' work is being increasingly acknowledged as he is being played and staged around the world and as his recordings are being published.