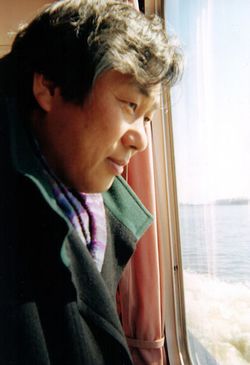 From 1974 to 1978 Hee Cheol Kim completed a composition course at the Kyung Hee University Seoul, graduated with a Bachelor of Music degree and a postgraduate course, which ended in 1980 with the Master of Music degree. He was able to spend most of his military service in the music corps, and during his studies he worked as a music teacher at a high school in Seoul. He also led various church choirs. In 1977 he won the prize for composition from the Korean Composers' Society. In 1983/84 he worked as a lecturer in composition at the University of Seoul. In 1985 he moved to Europe.

In his compositions, he combined elements of Korean traditional folk music with new music. This was particularly evident in his songs and chamber music, which found an interested audience in Germany and Korea.

After obtaining the permanent residence permit in Germany, Kim was able to start building the private Music and Art Sschool in Bremen. By 2000, he resumed his artistic career as a painter again and taught at his school in addition to piano, violin, singing, composition and music theory and painting in different techniques. From 2002 to 2007 he was able to show his mostly large-format and figurative pictures in Bremen in ten exhibitions. In Korea, exhibitions of his works were also organized in 2006 and 2016, most recently at the Daejeon International Art Show. With his compositions, he also had many successes in Korea in these years.

In Bremen and Hamburg he worked as a choir director for decades, with particular success at the Hamburg German-Korean Choir, for which he created many compositions and arrangements. In 2006 he enjoyed great success in Korea with his work SHINIL (Friends) for baritone, choir and orchestra, with which he once again expressed his desire to build a bridge between European and Korean music. His last composition, which was performed in 2016, was a commissioned work for the Korean School Bremen, our school yard for baritone, speaker, choir and cello ensemble.