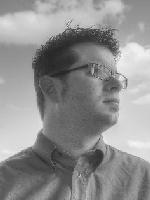 Imagine a circus that only comes to life at midnight where tents glow in the darkness while ghostly figures appear and disappear. Strange music comes from a carousel that turns without any viable riders on its dusty seats, breaking the eerie silence of the midway. The Haunted Carousel is an off-kilter waltz that emphasizes smooth, legato playing while introducing the chromatic scale and easy meter changes. The main theme is first heard in the woodwinds and appears three times, with a middle section that focuses on short fragments of the chromatic scale. Suddenly the music softens as the sun begins to rise, and the circus fades like a distant dream. This work takes inspiration from the young adult novel The Night Circus by Erin Morgenstern.