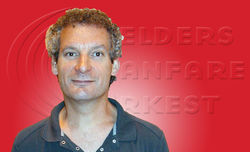 Harrie Janssen (b. 1960, Netherlands) is a Dutch composer and conductor.

Janssen studied trombone, music theory and conducting at the conservatorium in Arnhem.

He was involved in the founding of the Melomaan Ensemble and was artistic leader of this orchestra from 1981 to 1988. He led the Harmonie Orchestra of the Arnhem Conservatorium from 1983 to 1990 where he, to the present day, is associated as teacher of Harmonie/Fanfare direction. His activities cover a broad terrain including conductor of renowned wind orchestras, a teaching post at the foundation for Arts and Culture, Gelderland and sound mixer for several CD productions. New compositions and arrangements by Harrie regularly appear, commissioned by, among others, the Marinierskapel of the Royal Dutch Marines, het Fonds voor de Scheppende Toonkunst, and The Gelders Fanfare Band.