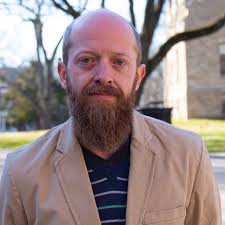 Two different ideas were in my mind as I wrote this piece: the first was a memory from taking my kids to a particular swimming pool, where there were these huge mushroom-shaped apparatuses in the children’s section. Water came from the top of the cap down over the edges, under which you could hang out and play, amidst all the kid chaos. The other idea was a dream image, in deeply saturated technicolor, of ancient desert cliff dwellings, like the caves of the Anasazi, or the city at Petra. These mental pictures superimposed, during the writing, into a blurry and bustling incongruous community, flourishing in air and water, that I seemed to be evoking in the piece.

At the premiere I gave a small talk beforehand where I expanded on the narrative of the piece. It’s like if one can take a moment of looking at the cascading curtain of water, freeze it in time, and move one’s perspective such that the water is horizontal and you’re “riding “ its surface like some sort of never-ending theme-park ride. There’s a lot of bustling ideas that come up and submerge over an ostinato texture, micro-peaks and just basic bubbling going on. All these impressions line up in the listening experience to create perhaps an off-kilter tableau rather than a narrative, but one that I hope imparts the guileless and emotionally open sense that maybe we as adults can try to recover sometimes from the child’s point of view.