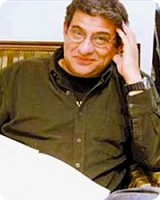 Haim Permont (b. 9 September 1950, Vilnius, Lithuania) is an Israeli composer and educator.

Since 1985, after completing his Ph.D. studies in the US he joined the faculty of the Academy of Music and Dance in Jerusalem where he works as a professor of Composition. Haim Permont held several academic positions at the academy including that of the Dean of the Faculty of Composition, Conducting, Theory of Music and Musical Education.

His works include music for all genre and media including symphonic, chamber, vocal music for mixed and children's choirs, vocal music for soloists and orchestra, concerti, opera, music for the theatre and cinema and multi-media works. In 1981 Dr. Permont was awarded the second prize at the Israel National Competition for Orchestral Composition sponsored by the Israel Sinfonietta Beer-Sheva; in 1979-1980 the Israel Chamber Music Society Award; in 1981 he won the Miller Prize for vocal composition; in 1983 he received the Nietzsche prize for a vocal composition; in 1984 the ASCAP Raymond Hubble Award; in 1993 he received the ACUM prize for his work Like the Lead of the Sky Before It Rains, and in 1994 the ACUM prize for his work "A Return to the South;" in 1995 the Prime Minister's Prize for Israeli Composers; in 1995 he won second prize for My Dear Son at the Competition for writing an operatic work held by NIO in conjunction with IMI.