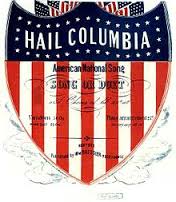 This work is also known as The Washington March and The President's March.

The anthem was composed by Philip Phile in 1789 for the first inauguration of George Washington, titled The President's March, arranged with lyrics by Joseph Hopkinson in 1798. It is also known as The Washington March. It was used in the United States as a de facto national anthem for most of the 19th century, but lost popularity after World War I when it was replaced by The Star-Spangled Banner in 1931.

It was the anthem for the President until it was replaced by the song Hail to the Chief. It is now the official vice presidential anthem. When played in honor of the Vice President, the song is always preceded by four ruffles and flourishes. In addition, the song has been used as a slow march during military ceremonies, often while the band counter-marches.