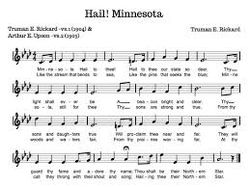 The song, Hail! Minnesota was written by two University of Minnesota students in 1904 and 1905. Truman Elwell Rickard (1881-1948) originally wrote the words and composed the music for this song in 1904 to be sung in a University of Minnesota play, The Apple of Discord, a Travesty. The play was a comedy about a football game and originally included a verse referring to the president of the university, Cyrus Northrop, "Hail to thee, our Prexy Sire!"

President Northrop asked another student to revise the song, eliminating reference to "our Prexy Sire." Arthur E. Upson (1877-1908) reworked the song, adding the new second verse, and Hail! Minnesota became the alma mater of the University of Minnesota.

Through the 1920s there was much discussion in the state about adopting a state song but no agreement on the choice of song was reached. In 1945, a group of prominent Minnesotans suggested that Hail! Minnesota be considered for the official song of the state. The university gave permission to the state to use the song and so did Mr. Rickard (Mr. Upson had died). The phrase in the second line of the song, "Hail to thee our college dear!", was changed to "Hail to thee our state so dear!". The song was adopted by the Minnesota Legislature as the official song of Minnesota on April 19, 1945 by Joint Resolution.

Minnesota, hail to thee!
Hail to thee our state so dear!
Thy light shall ever be
A beacon bright and clear.
Thy sons and daughters true
Will proclaim thee near and far.
They shall guard thy fame
And adore thy name;
Thou shalt be their Northern Star.

Like the stream that bends to sea,
Like the pine that seeks the blue,
Minnesota, still for thee,
Thy sons are strong and true.
From thy woods and waters fair,
From thy prairies waving far,
At thy call they throng,
With their shout and song,
Hailing thee their Northern Star.