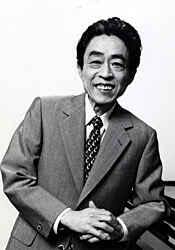 Nakamura was born in to Japanese parents, before moving to Kurume at a young age, where he attended high school. He graduated from Waseda University in Tokyo with a degree in literature.

Nakamura extensively played piano during his high school days, where he was invited to perform with local dance band Yasuhiko Taniguchi and Premier Swing, and The Red Hat Boys, a student jazz combo. After Nakamura entered Waseda University, he formed a jazz band named Big Four, but the band was soon disbanded.

As a composer, Nakamura later wrote many songs for various Japanese singers such as Kyu Sakamoto, enka singer Saburō Kitajima and Johnny & Associates' first group Johnnys. He worked closely with lyricist Rokusuke Ei ,and many of his songs were popularized by singer Kyu Sakamoto.

He wrote the music of the popular Japanese song Ue o muite arukō, released in 1961 in Japan. The song was released in the United States under the name Sukiyaki in 1963, peaking at the number-one position on the Billboard Hot 100. He and Ei also worked on the productions of Johnnys' 1964 debut single Wakai Namida and Saburō Kitajima's 1965 single Kaerokana.