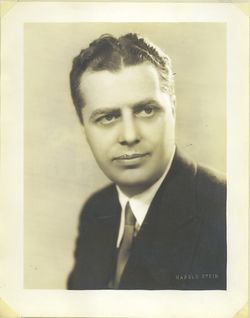 Haenschen studied at Washington University and, in 1925, began a career as a conductor. He appeared on several national radio programs, including the Maxwell House Show Boat, the American Album of Familiar Music, and Saturday Serenade. He became a member of the American Society of Composers, Authors and Publishers in 1925.

Haenschen came from a Swedish-German family and grew up in St. Louis. At the age of 13, he performed as a professional ragtime player in night clubs of the city. He was a friend of Scott Joplin and studied at Washington University, where he directed a popular dance band playing a mixture of ragtime and salon music. Through the mediation of a friend of the family he was given the opportunity to perform in the game breaks of the baseball team St. Louis Cardinals. In the period around 1914, compositions for the Victorian Military Band and Irving Kaufman (Underneath the Japanese Moon, with Gene Buck) were produced. In September 1916, Haenschen was given the opportunity to record Vik Records in New York (The Murray Walk) with a string arrangement ( WG Haenschen's Banjo Orchestra). In the same year, he recorded several songs with his band for Columbia, including Maple Leaf Rag, one of the few recordings of the title made during Scott Joplin's lifetime.

Before Haenschen joined the U.S. Army, he worked as a manager in the Starbucks department of a department store in St. Louis. After the war, he became a musician, a musician and a composer; La Rosita, written under the pseudonym Paul Dupont , became Haenschen's biggest hit. He worked as a musical director until July 1927 for the record department of the Brunswick-Balke-Collender Company (later Brunswick Records ) after 1919. In the field of jazz, he was involved in three recording sessions between 1929 and 1930.

For Brunswick, he oversaw and arranged hundreds of recordings, including the Ben Bernie orchestra, Gene Rodemich , Ray Miller , Isham Jones, and Benny Krueger.

After a management change at Brunswick, Haenschen worked for the radio as an orchestra conductor and musical director from 1927 onwards. In 1929 he became a supervisor at the New York Sound Studios, where the series World Broadcast Transcription was created. From 1931 he directed the program The American Album of Familiar Music . Haenschen worked there until the 1950s, as well as the musical director of various radio programs at NBC station and with Voice of Firestone for their transmissions from the Metropolitan Opera . He also conducted a series of interviews with musicians, sponsored by the Gustave Haenschen Collection he created at Ithaca College.