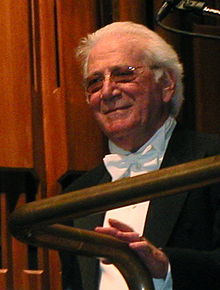 Jerrald King "Jerry" Goldsmith (1929–2004) was an American composer and conductor most known for his work in film and television scoring. He composed scores for such noteworthy films as Star Trek and Gremlins. A key element in the Gremlins’ success was the imaginative meld of traditional orchestral writing and cutting-edge electronics provided by Goldsmith.

At the center of the score is a ragtime theme played on synthesizer -- a raucous celebration of mayhem that harkens back to the early days of animation yet gives the music a funky, contemporary twist.

This is balanced by a heart-warming lyrical theme for the endearing mogwai character, Gizmo; an eccentric waltz theme for the Wicked Witch of the West may be Goldsmith’s most outrageous comic confection. Solo fiddle invokes the devil, bells (both acoustic and electronic) invoke the mystery of the mogwai, and pulse-pounding action music supports the wild physical antics of the destructive creatures.