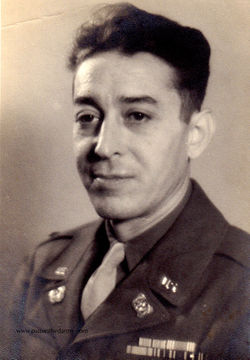 Gregorio Diaz (1905, Canary Islands - 1989) was an American band leader and composer. Leaving the Canary islands at 12, he made his way to Mexico, crossed into the United States in 1924, and went right to Fort Bliss, Texas, where he enlisted in the 7th Cavalry’s band. He apparently had learned clarinet and saxophone while playing in a youth band in his home village.

In the Army, he moved among several different bands in Colorado, Panama and Washington, becoming leader of the 61st Ground Forces band on June 7, 1944, the day after Allied forces landed in Normandy on D-Day, according to his military service record. It was this band that George Patton designated as the official band of his famed Third Army. Diaz wrote Third Army March to honor this organization in 1945.

After World War II Diaz joined the U.S. Army Air Forces [later the U.S. Air Force], leading the bands at Lowry and Kessler Air Force Bases. He retired from the Air Force in July of 1954.