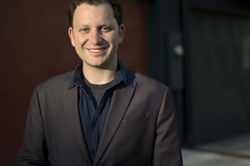 Greg Simon (b. 1985) is an American composer and jazz trumpeter.

As a jazz musician, Greg has studied with Bill Lucas, Ellen Rowe, and Brad Goode. He’s performed with the Jodi-Renee Band, the Park Hill Brass, and ensembles at the University of Michigan and the University of Colorado. Greg arranged music and performed for Bill Lucas’s recent album, On the Fringe of Fire, He is active as a proponent of new music for improvising musicians; among his credits as featured soloist are appearances in world premieres from composers Michael Theodore, Hunter Ewen, Liz Comninellis, and Kari Kraakevik.

Greg is also a fluent performer in the Balinese gamelan tradition, having spent five years with Denver’s Gamelan Tunas Mekar. He is also an avid music writer, with pieces published in New Music Box and the Oxford University Press.

His work draws its inspiration from jazz, funk, Balinese Gamelan, abstract expressionism, Chilean folk song, and a thousand ever-changing fascinations. Greg’s works have been performed by ensembles and performers around the country, including Alarm Will Sound, the Fifth House Ensemble, the Playground Ensemble of Denver, and the California All-State Symphonic Band. He has presented work at conferences for the American Band College, the College Band Directors’ National Association, the World Saxophone Congress, and the North American Saxophone Alliance, as well as being featured in radio and digital broadcasts from Pendulum New Music and WFMT. Greg has won the Brehm Prize in Choral Composition from the University of Michigan, the POLYPHONOS competition from the Esoterics, and was the winner of the TorQ Percussion Quartet’s first annual Composition Competition. He has also received recognition for his work from the Pacific Chorale, the Fifth House Ensemble, and CBDNA, among others. Greg was a featured composer at the 2013 Mizzou International Composers’ Festival and was the 2013-14 young composer-in-residence for the Detroit Chamber Winds and Strings. Greg’s music is published by Hal Leonard, and recorded on the Fifth House, SMS Classical, and Terpsichore Labels.

Greg is currently on the composition faculty at Concordia University of Ann Arbor and the Brevard Music Center.