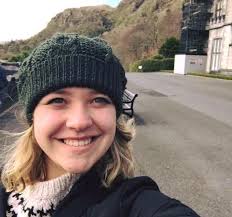 Grace Baugher (b. 1995, Kansas) is an American composer

From a young age, Grace has pursued many areas of music such as piano, voice, wind instruments, music theory, and composition. After noticing patterns in the music she was playing on the piano, she began to apply those harmonic movements with new melodies and thus began composing her own music. What started as songs written for herself and her sister to perform eventually evolved in to chamber and choral works. In her senior year of high school, she was offered the opportunity to participate in the young composer’s institute with the Kansas City Symphony with composer in residence Adam Schoenberg. During this year of study, she became acquainted with compositional and orchestration techniques, observed first readings, and worked with the symphony musicians. The program concluded with the premier of her first chamber work, Luminescent Skies in Helzberg Hall at the Kauffman Center in Kansas City with members of the Kansas City Symphony.

Ms. Baugher recently [2019] graduated from the University of Tennessee with a masters in music composition and work in music theory pedagogy. Previously, she studied at Kansas State University, earning a bachelor's degree in music composition with an emphasis in horn performance and a minor in leadership studies. Along the way she had pieces performed by ensembles, faculty and guest artists. She is working toward a graduate certificate in music education, in order to work with bands beyond her compositions.

Ms. Baugher is a composer whose music employs memorable melodic material and whimsical styles. Her pieces have begun to spread across the country, being played by bands and chamber groups at a variety of schools and conferences.