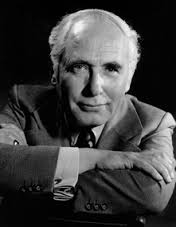 Godfrey’s father wanted him to go into banking or insurance, which were traditional careers in the Ridout family and considered to be good jobs in the late 1930s; however, following an unsuccessful job interview with a bank manager who was looking for recruits who could add strength to the branch hockey team, the enthusiastic, but not physically gifted, Ridout ended up pursuing musical studies at the Toronto Conservatory of Music instead.

He grew up listening to performances of the newly formed Toronto Symphony Orchestra and claims that this kindled his early interest in music. He taught composition at the University of Toronto for most of his career, but also composed scores for the Canadian Broadcasting Corporation (CBC) and wrote articles on music for many Canadian journals. Ridout was often branded as being too musically conservative in a time where music was moving into the extreme avant-garde; however, Ridout said he didn’t see himself in the role of musical inventor. Instead, he believed that his musical style was best used as a means of communication with his audience. He liked the idea of fun in music and loved concluding his pieces with what he called a ‘good tune’.