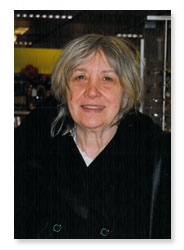 Gloria Coates (b. 10 October 1938, Wausau, Wisconsin) is an American composer.

Ms. Coates' studies took her from Chicago and Louisiana State University (with a master's degree in composition), to New York’s Cooper Union Art School, and Columbia University for postgraduate studies in music composition. She studied with Alexander Tcherepnin, Otto Luening, and Jack Beeson.

While maintaining a residence in the United States, Gloria Coates has lived in Europe since 1969, where she has promoted American music both in organizing a German-American Music Series (1971–1984), writing musicological articles, and producing broadcasts for the radio stations of Munich, Cologne, and Bremen.

From 1975 to 1983 she taught for the University of Wisconsin’s International Programs, initiating the first music programs in London and Munich. She has been invited to lecture on her music with performances in India, Poland, Germany, Ireland, England, and the United States at Harvard, Princeton, Brown, and Boston Universities.

Gloria Coates’s work includes 11 symphonies, varied chamber music, and solo, vocal and electronic compositions. Her breakthrough came with the 1978 première of a work composed in 1973, Music on Open Strings, at the Warsaw Autumn Festival, a work for string orchestra in which the strings retune. It proved to be the most discussed work at the festival and throughout the European press. In 1986 it was a finalist for the KIRA Koussevitzsky International Award as one of the most important works to appear on record that year.

Besides composing, Gloria Coates also paints abstract expressionistic paintings that are often used as the covers for her albums.