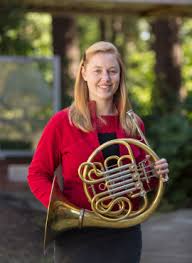 Gina Gillie (b. 1981) is an American educator, hornist and composer.

Dr. Gillie studied horn performance with Douglas Hill at the University of Wisconsin-Madison where she received her master's degree in 2006 and her Doctorate of Musical Arts in 2009. She completed her bachelor's degree at Pacific Lutheran University [PLU} in 2004 as a horn player in Kathleen Vaught Farner’s studio. In 2006, she attended the Tanglewood Music Festival as an orchestral fellow where she worked with world-class musicians such as James Levine, Elliot Carter, Bernhard Haitink, Stefan Asbury, Herbert Blomstedt, Charles Rosen, Barry Tuckwell and John Williams.

Gillie got her start as a composer in graduate school, where she was encouraged by her mentor, Douglas Hill, to write music as part of the educational experience. Since then, she has been commissioned to write several works for a variety of chamber settings. Her music has been performed at multiple Northwest and International Horn Symposia, as well as internationally in England, Canada, Portugal and Australia.

As associate professor of music at Pacific Lutheran University, she teaches horn, composition, aural skills, chamber music, music history and capstone courses, conducts a horn choir, and performs frequently with faculty groups and in solo and chamber recitals. As an orchestral player, she held the position of assistant principal with the Symphony Tacoma from 2008-2018 and has also played with the Northwest Sinfonietta, The Auburn Symphony, and the Beloit-Janesville Symphony Orchestra. She is a member of two faculty chamber ensembles at PLU, the Camas Wind Quintet and the Lyric Brass Quintet.