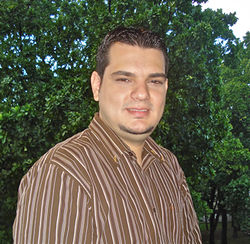 Giancarolo Castro was born into a family of musicians. He began as a trumpet player and later as a composer in “El Sistema”. He studied at the conservatory of music Vicente Emilio Sojo in Barquisimeto and then at the University Institute of Musical Studies in Caracas.

As a conductor, Castro has participated with many orchestras and chamber music groups, such as Simón Bolívar Youth Orchestra, Paris Symphonic Orchestra (France) and the Chacao Youth Symphony Orchestra, among others.

Influenced by Latin American music, jazz, electronic and film music, and under the tutelage of the Colombian maestro Blas Atehortúa, his compositions range from academic music to Latin music. His most important work, Grand Fanfare, was completed in 2004.

In 2017 he moved to the United States to develop his musical career, the year that Grand Fanfare was performed by the United States Marine Band, and his Concerto for Tuba was performed by Carol Jantsch, principal tuba of the Philadelphia Orchestra. Castro was invited as a guest composer and conductor by the University of Minnesota Duluth Department to offer lectures of his works and conduct the Senior High School Honor Band Festival and the Twin Ports Wind Orchestra in the Weber Music Hall. In May 2019, his Sonatina for Tuba was premiered by Carol Jantsch in the International Tuba and Euphonium Association 2019.

In September 2019 Giancarlo became the conductor of the Reed College orchestra, being the first Latin American conductor to obtain this position.