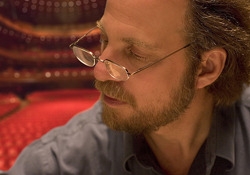 At university, Prof. Levinson studied with George Crumb, Richard Wernick, and George Rochberg. After college, Levinson went to study composition with Olivier Messiaen at the Paris Conservatory. He was inspired by Messiaen's use of birdsong and his unique harmonic ideas, as well as the musics of Bali and India. Levinson has also worked with Simon Rattle, Ralph Shapey, and Seiji Ozawa.

His notable works include Anahata, Symphony No. 2, and Black Magic/White Magic (1981), a collaboration with his wife, poet Nanine Valen. Numerous CDs of his music have been released, and his scores are published by Theodore Presser.

His works have previously been performed by orchestras such as the Philadelphia Orchestra and the Los Angeles Philharmonic. His newest work, Au coeur de l'infini, for solo organ, was premiered in May 2013 by Olivier Latry at the Cathedral of Notre Dame, in honor of the 850th anniversary of the beginning of construction on the cathedral.

Levinson has received numerous awards for his music, including two fellowships from the National Endowment for the Arts, the Goddard Lieberson Fellowship and the Music Award from the American Academy of Arts and Letters, and the Pew Fellowship in the Arts (2007).

He has taught music at Swathmore College, Pennsylvania, since 1977.