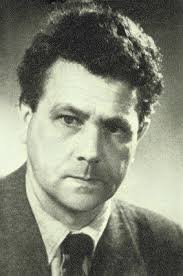 Gerald Finzi was born the son of John Abraham (Jack) Finzi and Eliza Emma (Lizzie) Leverson. He was educated privately. During World War I the family settled in Harrogate, and Finzi began to study music at Christ Church, High Harrogate, under Ernest Farrar from 1915. Finzi found him a sympathetic teacher, and Farrar's death at the Western Front affected him deeply. During these formative years he also suffered the loss of all three of his brothers. These adversities contributed to Finzi's bleak outlook on life, but he found solace in the poetry of Thomas Traherne and Thomas Hardy, whose poems, as well as those by Christina Rossetti, he began to set to music. In the poetry of Hardy, Traherne, and later William Wordsworth, Finzi was attracted by the recurrent motif of the innocence of childhood corrupted by adult experience. From the very beginning, most of his music was elegiac in tone.

After Farrar's death, Finzi studied privately at York Minster with the organist and choirmaster Edward Bairstow. In 1922, following five years of study with Bairstow, Finzi moved to Painswick in Gloucestershire, where he began composing in earnest. His first Hardy settings and the orchestral piece A Severn Rhapsody were soon performed in London to favourable reviews.

During the 1930s, Finzi composed only a few works, but it was in these, notably the cantata Dies natalis (1939) to texts by Thomas Traherne, that his fully mature style developed. He also studied and published English folk music and music by older English composers such as William Boyce, Capel Bond, John Garth, Richard Mudge, John Stanley and Charles Wesley.

During World War II he worked for the Ministry of War Transport and lodged German and Czech refugees in his home. After the war, he became somewhat more productive than before, writing several choral works as well as the Clarinet Concerto (1949), perhaps his most popular work.

By now, Finzi's works were being performed frequently at the Three Choirs Festival and elsewhere. But he learned that he was suffering from the then incurable Hodgkin's disease and had at most ten years to live. Something of his feelings after this revelation is probably reflected in the agonized first movement of his Cello Concerto (1955), Finzi's last major work, although its second movement, originally intended as a musical portrait of his wife, is more serene.

Finzi is best known as a choral composer, but also wrote in other genres. Finzi became one of the most characteristically "English" composers of his generation. Despite being an agnostic of Jewish descent, several of his choral works incorporate Christian texts.