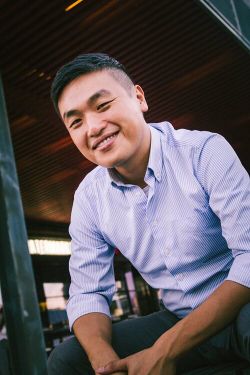 George Tsz-Kwan Lam (b. 1981, Hong Kong) grew up in both Hong Kong and Winthrop, Massachusetts.

Dr. Lam has studied with composers Charles Fussell, Martin Amlin, Christopher Theofanidis, Nicholas Maw, Stephen Jaffe, and Scott Lindroth. George holds a Ph.D. in music from Duke University, an MMus from the Peabody Conservatory, and a BMus from Boston University.

Lan's work focuses primarily on projects that intersect music, theater, and placemaking, which is to create music that is intimately connected with the place where it is performed and heard. Such projects include a concert band work in 2017 based on scenes from the town of Shrewsbury, Massachusetts, performed by students who live in the town.

George Lam is assistant professor of music and coordinator of music at York College, City University of New York. Along with his colleague Ruby Fulton, George also serves as co-artistic director of Rhymes with Opera. Tecent operas include the 2018 collaborative opera Rumpelstiltskin, created with co-composer Ruby Fulton and librettist John Clum, as well as the 2015 one-act opera Heartbreak Express also with a libretto by John Clum.