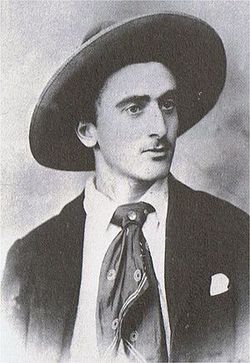 Drumm was the son of a poor farmer in the German province of Palatinate. At the age of 14, with only seven years of schooling, he departed for Edinburgh, Scotland, with a small band of migratory musicians. These "Mackenbachers, " so named for a small village in the heart of the Palatinate, were in demand all over Europe. Eventually, Drumm accepted an engagement at Edinburgh's Royal Theatre when he was about 23, and it was at this time that he began composing and arranging. He was basically self-taught.

Drumm then formed his own band. It achieved a measure of fame in Ireland and led to his appointment as Kapellmeister in the court in Dublin. His band represented Ireland at the St. Louis World's Fair in 1904, and he remained in the United States, moving to New York in late 1905.

Drumm became an American citizen in 1911. He conducted in vaudeville houses and played first violin in or directed movie theaters on Broadway, eventually becoming conductor for the famous Ziegfeld Follies. One of his most significant conducting jobs was in 1954 as director of a band and choral pageant sponsored by the New York Evening Journal in celebration of the 100th Anniversary of the birth of John Philip Sousa.