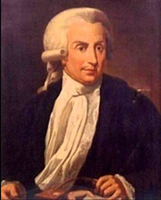 Druschetzky studied oboe with the noted oboist and composer Carlo Besozzi in Dresden. He then joined the band of an infantry regiment in Eger, with which he was later stationed (sequentially) in Vienna, Enns, Linz, and Branau. In 1777 he was certified as a drummer. In 1783 he moved to Vienna, where he became a member of the Tonkünstler-Sozietät. Three years later he was Kapellmeister for Anton Grassalkovič of Gyaraku and moved to Bratislava.

He had an official position as kapellmeister for Anton Grassalkovics in Vienna, and it was perhaps through this prince that he developed ties with Haydn. We do not know the role of Haydn beyond supplying the autograph scores, but Druschetzky made harmoniemusik arrangements of extraordinary length of both the Creation and the Seasons. The question that is even more interesting is the fact that while attributed to Druschetzky, the parts of these two massive sets are in the hand of Haydn’s copyist.

It is believed Druschetzky started writing music in the 1770s, most of it for his band. While serving in the military he became interested in the timpani and was one of the first to compose works for solo timpani requiring five or six instruments to provide different pitches. He also wrote chamber music and music for orchestra, including 27 symphonies and concertos for various instruments. A couple of his operas survive, but a suite of incidental music and a ballet are known to be lost. Druschetzky is credited with one of the earliest uses of the BACH motif.

The Gerber’s Encyclopedia (1812) reported that since 1800 Druschetzky had, “composed a great number of excellent Partitas for wind instruments … [which] have received merit and invigorated all of Germany.” Indeed he became one of the most prolific of composers of harmoniemusik, and his partitas keep turning up in the libraries in Central Europe. In one case, David Whitwell participated in the opening of a hidden door in a palace where seventy of his previously unknown partitas were found.