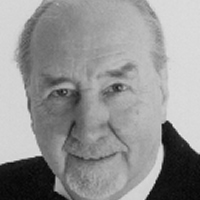 Geoffrey Brand is an English-born musician and conductor whose international reputation has been built over a wide range of musical activities.

During his studies at the Royal Academy of Music, London, where he gained an Open Scholarship, he won prizes as a trumpet soloist and orchestral player and attracted attention as a conductor.As a trumpet player he was invited to join the Royal Philharmonic Orchestra (touring the USA with that orchestra in 1950) later becoming a member of the Royal Opera House Orchestra, London for 5 years.

In 1955, Geoffrey Brand became a BBC Producer of music programmes, working in radio and television for 12 years, before leaving to concentrate on a conducting career. Since then Geoffrey Brand has worked with orchestras, choirs and bands, making regular tours as conductor and music educator to the USA, Japan, Australia, New Zealand, Israel, Malaysia, Indonesia and extensively throughout Europe including conducting tours in Russia and Kazakhstan.Geoffrey Brand is founder, artistic director and conductor of The City of London Wind Ensemble, a prestigious group which draws its players from the finest professional wind players in London. CD recordings of the C.L.W.E. have won international acclaim.

With his wife, Violet, Geoffrey Brand has written two books, “Brass Bands in the 20th Century” (1979) and “The World of Brass Bands” (1986) both published in England by Egon Publishers.In the USA Geoffrey Brand is highly sought after as clinician and conductor at Universities and Colleges.

Recent acknowledgements of his work include the International Award of the Midwest Clinic presented In Recognition of Outstanding Contributions and Dedication to Instrumental Music Education on an International Level and also the Grainger Award for services to the music of Percy Grainger.