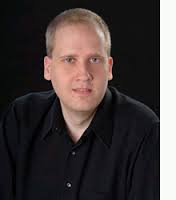 According to a statement released by Ball State University, the themes of Ryan Fraley's symphony are based on actual strands of DNA, with different notes assigned to different aspects of the genome.

"The fact that these data represent the code for life itself appeal to the artist as well as the scientist," Fraley, a Ball State alumnus, said. "I started at random points on each chromosome, encoding musical pitches until enough thematic material existed. Because much of the material was too random to make melodic sense, I ended up encoding about four times more sequences than needed. Allowing myself the freedom to pick and choose good data, I was able to use sequences that naturally applied a harmonic structure."

The work requires, in addition to the wind ensemble, a piano, harp, and Tibetan singing bowl.

Joseph Scagnoli, the wind ensemble's conductor, commissioned the work from Fraley. "Few composers are able to write a piece at this level," he said. "It is stretching the ability of our musicians, but they're willing to put in the extra effort because they sense that this is a visionary symphony."