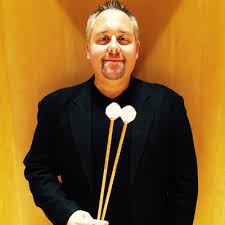 Gene Koshinski (b. 1980) is an American percussionist and composer.

He has performed in Argentina, Austria, Belgium, Brazil, China, France, Germany, Japan, Jordan, Slovenia, the UK, Canada, and throughout the United States; including over 120 guest performances/lectures at some of the most prestigious institutions in the world including the Royal College of Music, The Juilliard School, Conservatoire de Lyon, Shenyang Conservatory, Beijing Conservatory, the National Music Conservatory in Amman, and the University of Rio de Janeiro.

As a composer, Koshinski's works have been performed in more than 40 countries, in five continents, with hundreds of performances per year and his landmark book, entitled TWO, is currently used in more than 75 university curricula. In 2012, Koshinski was named the recipient of the ASCAP Foundation Nissim Prize for best new score for large ensemble for his work Concerto for Marimba and Choir. While his compositions are most often heard in the concert hall, they have also been heard at film festivals, art museums, ballets, and recently as background music in the award winning short film The Passage which was premiered at the Sundance Film Festival in 2018.

In 2002, Koshinski won the National MTNA Percussion Competition and in 2004, finished third in the prestigious Universal Marimba Duo Competition in Belgium. In the years following, his career has been filled with incredible opportunities to perform with many celebrated artists/organizations including NFL Films, Late Show with David Letterman, Mary Wilson (the Supremes), David Samuels, Wycliffe Gordon, and as principal percussionist for the Duluth Symphony for the past 12 years. For his work with NFL Films, he can be heard on the Emmy award-winning soundtrack A Century of NFL.

Koshinski is a founding member of the Quey Percussion Duo. QPD has generated nearly 200 new works over the past 16 years and has collaborated with renowned composers including Pulitzer Prize recipient John Luther Adams, Emmanuel Séjourné, and Casey Cangelosi. The group is the only professional percussion duo in the U.S. that holds a full-time university residency offering an entirely unique experience for their students.

Dr. Koshinski accepted a new position as professor of percussion at the University of Delaware beginning fall 2020.