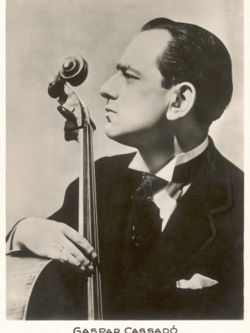 Gaspar Cassadó (30 September 1897, Barcelona, Spain - 24 December 1966, Madrid) is remembered by some as a virtuoso cellist, a student of the great Pablo Casals, a competent composer, and an authority on painting; others recall him as a musician whose skill and commercial ambition enabled him to perpetrate a successful hoax on a generation of band and orchestra musicians.

Cassadó made his American professional debut playing the Haydn D Major Concerto with the New York Philharmonic in 1936.

Gaspar Cassadó achieved great success as both a cellist and composer. He enjoyed a thriving career in the 1920s and 1930s, but his reputation suffered enormously after World War II, when many musicians, led by Casals, accused Cassadó of having collaborated with the fascist government of Italy, where he had lived during the conflict. However, there is a little or no evidence that Cassadó was a collaborator, and some to suggest the contrary. Much has been made of a private feud between the two cellists.